Freeze frame updated – a view from one of the breastfeeding counsellors 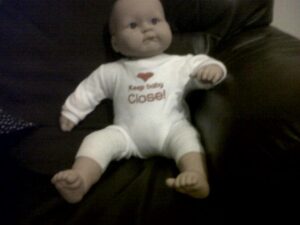 I took a moment the other day in the busyness and noise in the middle of the drop-in.

I sat back – on the floor with my legs going numb, where I had just been talking for a while with a mother and her baby. I was at the perfect level to see his eyes as he sat on his mother’s lap. Deep blue eyes showing he was full and content. Full with milk, satisfied by his mother’s breast.

I look around the room and for a moment, everything freezes. I look at the mother lying back on her chair with her tiny, pink newborn in just a nappy that swamps his tiny body and his wrinkly skinny legs. He is lying draped over her stomach and breast and he is still with his head resting on his perfect pillow.  She is looking down at him, stroking him. Her whole body is oozing with that warm, relaxed look of a mother in love, and a mother who is discovering she can feed her baby. The grandmother sits there too – soaking up the oxytocin and watching her daughter and grandson. Remembering similar moments maybe, swelling with pride maybe, regretting decisions she made, maybe.

And the mother with her two-week-old, who had been there last week. She has that air of comfort, that she has done this before; and that it is going to be okay. She knows we don’t have a magic fix, but she will be listened to. And she waits to tell someone how long the last week has been, that there have been moments of it all going as she wanted, but some dark, lonely moments when she wondered whether she could do this. She waits her turn, watching the other mothers with empathy of shared solo journeys.

And the father sitting anxiously on the edge of the chair as he watches his tiny baby and sobbing wife talking with one of the breastfeeding counsellors. He looks nervous – perhaps because being surrounded by women breastfeeding is not common to him. But I don’t think it is that. The nervous clasp of his hands, the focus in his eyes, is only for his baby and her mother. She is crying – that’s not unusual – and she shows her desperation to make this work. She is telling her story, and her story is being heard. And she is being handed a tissue and a cup of tea.

And I see the mother who I had spent time with at the beginning. She had arrived anxious and rushed, but is in no rush to leave now. She is soaking up the pride, joy even, that she has seen that she wasn’t doing anything wrong, that she wasn’t letting her baby down, that it wasn’t her fault it hurt or that things were not like she had seen in the magazines. But now, she has breastfed her baby and she is basking in his milk-drunk sleep on her chest – and it hadn’t hurt as much. She looks at peace as she rests her face on the top of his head, nuzzling the softness of his hair.

There are three mothers waiting, with babies of different ages, but all with patience with their babies and with their wait. Even the one who has made it here with her toddler as well as her three-week-old. She watches her play with another toddler – and she looks relieved. They made it here and they’ll wait, with a breath of optimism that maybe things can be different and better. They hope. They chat. They laugh.

And I look at the mother watching intently as one of other the breastfeeding counsellors talks with her. She’s watching hands being shaped, moving and showing how her eager baby knows what to do, but just needs a helping hand. She watches as the heavy, rice-filled, doll nestles in the arm of the breastfeeding counsellor, who out of instinct is gently stroking the doll as she talks.

And as I breathe in to get going – I think how far we have come. From only a short while back, not knowing how we would keep doing what we are doing to today, we are here. We have grown our own baby, our small charity. We are here because of the energy, determination and commitment of a group of women – breastfeeding counsellors, trustees and volunteers who together have shared energy and determination to keep this special place going. We are here knowing that we are strengthened by their passion and commitment behind the scenes, as they give their time, expertise and wisdom. We are here knowing that we are cheered on by the supporters who have given us time and money and encouraging voices. It’s a team and I’m so proud of this special place.

And it IS a special place – it’s a place where mothers and babies come with hope, with desperation, with fear and optimism. You won’t know what it’s like, it won’t make sense why it is so precious, unless you’ve needed to be here. Unless you’ve walked in here in exhaustion and pain and fear and not knowing if you can keep doing this, you won’t understand the importance of hope that your breastfeeding journey can be different.

And we will keep giving hope, and support and information and plans for mothers and babies who are there because they want to be and they need to be. And we know we will need to work hard to keep being there in the future.

And so I stand up, ignore the pins and needles in my feet, pick up my knitted breast, and ask who’s next.  And we start again..  ‘so tell me how things are going?’.

(This is an update to the post of the same title that Justine wrote when we lost our funding two years ago.)