A father’s view on breastfeeding 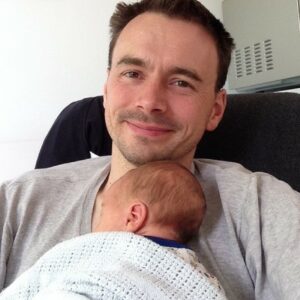 We are delighted to share a guest post from Tom Bashford. Tom’s son and wife, Cat, came to one of our drop-ins for support in the early days.

Breastfeeding. A simple biological transaction between mother and newborn to get calories into the little one, and a subject it’s hard to imagine being anything other than exclusively female. The prospective father could easily imagine that the only role for him would be to fetch and carry while the newbie is plugged in, and to ensure a ready supply of water, tea, and cake, to fuel his other half as she gazes adoringly at the little sucker.

It turns out, like with most things, that life is more complicated. Breastfeeding, it transpires, is a cultural, political, personal choice which is the subject of such ire and discourse that it fills the pages of academic and popular media. Battle lines are drawn, camps divided, and messengers between the two routinely shot.

Our experience, with a premature newbie needing top-up feeds down his nasal tube, has taught me that the decision to breastfeed or not is complex and that whichever path you’ve chosen, support is welcome. For those who want to breastfeed but are struggling, bodies like the Cambridge Breastfeeding Alliance (CBA) are a mix of non-judgemental support, information, and sanity in what can feel like a fraught arena – both in person with other parents and online if you dare wander into the forums.

As the Y-chromosome-carrying half of our parenting team, I have learnt many things about breastfeeding in the last few years. It can be hard, and painful, and frustrating. It can be easy and joyful if you’re one of the lucky ones. The worry that your little bundle of joy isn’t getting enough food is a paranoia it’s almost impossible to totally put to bed. The academic evidence that it’s about more than calories and that both the milk itself and the act of feeding are little natural miracles supporting the immune system, jaw development, and gut health is very convincing. The path between these extremes is difficult to navigate and goes a long way to explaining the fervour with which the debate rages.

There is a morass of opinion and science (not to mention pseudo-science) and the questions are endless. What in the blazes are cranial osteopathy, tongue-tie, ‘pump-and-dumping’, and post-natal doulas? What is the actual evidence that ’breast is best’ and how do you discuss this with those who’ve elected – or been forced – not to breastfeed? Will they really sleep better with a bottle of formula in them? Is the world full of breastfeeding police who sneer at and pity those who aren’t latching on, or is the world full of formula-pushing corporate tools who need to be shouted down to encourage mothers that breastfeeding is an important public health issue? Does having a pair of testicles mean that you have no voice, no part, and no welcome into this debate?

If you’re looking for answers, then this is not the place for you. All I can say with certainty is that it’s complicated. However what I have realised is that while breastfeeding is ‘natural’ this does not mean that it’s easy – an analogy for the whole spectrum of parenting in fact. For those struggling to breastfeed, there needs to be an army of support that once might have been provided by mothers, aunts, grandmothers and in a more fragmented modern age is often provided by maternity care assistants, breastfeeding support workers, postnatal doulas, lactation consultants and the like. Enter the CBA – a visionary little charity trying to support families who want to breastfeed and need a helping hand.

So what place for me, and other non-breastfeeding partners (not necessarily fathers)? Breastfeeding can be hard, and like all hard things in the parenting arena, can need the whole team to make it work. We’re not fetch-and carriers (only); we’re advocates, researchers, counsellors, and teammates. The CBA is there for us, just as much as for the mother and new arrival, because we are just a much part of the puzzle in making the whole enterprise work. Breastfeeding, like everything, is not just biology – it’s yet another big meaty life choice that needs making happen if that’s your choice. All help gratefully received.

1 thought on “A father’s view on breastfeeding”