Amy Brown Asks: What Will It Take For Governments To Really Invest In Breastfeeding? 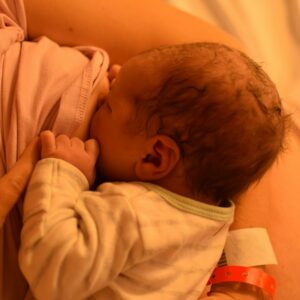 We are proud to host this blog post by our friend Amy Brown. Professor Amy Brown is an Associate Professor in Child Public Health in the Department of Public Health, Policy and Social Sciences at Swansea University, UK. Her research explores the psychology of maternal and infant health and well-being, particularly during the first 1001 days of pregnancy and the first two years of life. She has a particular expertise in infant nutrition, but her research also explores the wider yet inter related issues of normal baby behaviour, sleep, parenting and postnatal depression. Amy is the author of Breastfeeding Uncovered, one of the most influential and far reaching books on breastfeeding in recent years, and her next book, The Positive Breastfeeding Book: Everything You Need To Feed Your Baby With Confidence is out soon.

If you’re a breastfeeding supporter, I bet you have a long list. A mother helped here, a social media conversation there … real differences made in many individual mothers’ lives. But if you are in a position to really change things on a large scale? What if you were in a high up strategic post in health? In government? Leading a major organisation? Can I ask what you’ve done to make the world a little more breastfeeding friendly this year?

Because although down here on the ground, many breastfeeding supporters are running themselves ragged day in day out, those with the real power don’t appear to have made major changes in the last year. In fact, instead, many, many places around the UK have seen major cuts to their breastfeeding support services as funding is withdrawn.

Some governments have breastfeeding strategies, but what good is a strategy unless it actually changes anything? Many mix up strategies with instruction, simply stating that women should be supported to breastfeed, without actually doing anything to support them. Others have great ideas about how to improve breastfeeding rates, but without investing properly in them, they just become yet another wish list.

The same goes for organisations. Many state in theory that they are supportive of breastfeeding but cannot point to a policy. Others can show you a policy, even boast of the structures they have put in place to enable women, but when you check out their ‘state of the art breastfeeding room’ it turns out to be a stationery cupboard, and Brian from accounts is foraging for once seen paperclip supplies.

So what will it take to change their minds? For some reason the statistics don’t matter, or at least they don’t matter enough for them to actually follow through with investment. Back in 2016, the Lancet series on Breastfeeding asked ‘Why invest and what will it take to improve breastfeeding rates’? Apparently knowing that increasing breastfeeding rates would reduce the number of mothers and infants dying from preventable illnesses didn’t arouse a high enough level of interest. Maybe some wrote this off as applying to those only in developing regions. Yet economic analyses in the UK, USA, and Australia show just how much money could be saved on healthcare costs if we invested in supporting breastfeeding (spoiler: it’s certainly enough to reinvest back in those cut breastfeeding support services).

So what would make them sit up and listen?

How about if we made them realise it’s their problem? As in really, their problem that they better get on with solving? To do that we need a major shift in thinking as currently governments are benefitting from a cycle where

This is of course hugely over simplified, but what if, WHAT IF, instead of blaming ourselves, we recognised we had been majorly let down, and demanded acknowledgement and compensation for that? After all, we know that on a population level, breastfeeding protects the health of mother and baby. In any other medical situation, if your health is compromised by not getting the right care, this is taken seriously. Why not for infant feeding?

Smoking has been banned in public places mainly because of the established evidence that second and third hand smoke increases non-smokers’ risk of lung cancer. However, this was known for some time before this legislation was put in place. What changed however, was that once this evidence was established, individuals who were forced to experience second hand smoke could use this in lawsuits against their workplaces. Employers – and government – were starting to be held accountable, at significant cost,  and thus governments started to introduce laws preventing work and public place smoking. Of course, the accompanying documentation all states it is to do with promoting health, but a key element appeared to be individuals recognising that their health was at risk and claiming financial compensation.

But think about the wider concept for a minute. What would happen if women formally complained or even sued if…

These cases may even be starting in specific areas for infant feeding. Lawsuits have arisen over a thickener added to formula for premature babies, and class action is developing over the potential impact on bone fractures and rickets of a brand of hypoallergenic formula. But what about the day to day issues – and those issues listed are sadly day to day occurrences for many women. Why is it acceptable that women are not only not getting the support they need, but getting downright inaccurate advice? Where is the comeback for that? The complaint? The change in service?

The problem is we rarely complain. We don’t want to complain about the support we didn’t receive because we don’t want to get our lovely midwife into trouble – we can see how rushed off her feet she is. How can we blame overworked healthcare professionals who aren’t properly funded or trained anyway? Far too often, health professionals are the victims of government cuts too. Breastfeeding support is the responsibility of all of us, not just midwives and health visitors.

But mainly, we don’t complain because we are too busy blaming ourselves. In recent research I conducted with over 2000 women who hadn’t been able to meet their breastfeeding goals I asked them ‘so who do you blame for that?’

In the majority of cases, women who were desperately hurting were turning this all inwards and blaming themselves. They felt they didn’t try hard enough. They couldn’t manage it. They didn’t push through the pain.

No, no and no! It is not the responsibility of individual women to do this alone. Breastfeeding is a team effort that should have the support right from the top through to those closest to you. Health professionals, work places, communities, family, partners – they all play a major role in determining whether breastfeeding succeeds. They all should take some responsibility when breastfeeding doesn’t go to plan.

If it wanted to.

Now how do we make it want to?

And meanwhile, Cambridge Breastfeeding Alliance battles on, providing totally free, skilled support to the parents of Cambridgeshire. We are very grateful to Amy for all the work she does to support our endeavours and make the landscape for breastfeeding families more supportive and welcoming.

6 thoughts on “Amy Brown Asks: What Will It Take For Governments To Really Invest In Breastfeeding?”